Meet my friend and client Hakan.

Firstly I’d like to thank Hakan for sharing his story to help me write this blog post.

Hakan trained for years in his twenties and absolutely loved going to the gym. It was very self directed, he wrote his own program and trained at a regular gym without coaching.

Then he sustained a back injury.

This was a combination of his work as a courier. He was always lifting heavy and awkward objects, having to load and unload off trucks. Often on his own.

Combined with training at the gym un-coached and often with bad form during lifting- he hurt his back. As a result, he could not train or WORK for over a year.

This affected him, obviously physically but also mentally. He was frustrated that he couldn’t be active like he normally is and started smoking cigarettes. In a year- he had put on 20 kg.

To add insult to injury, because his injury was sustained at work he was forced to use the advice and guidance of the workers comp physio’s and appointment physicians. The plan they gave him was basically pain management and massage. He made absolutely no progress with his strength or rehabilitation in those 12 months.

He came to me for help.

I am not a physician- but during his five fundamental training sessions it was very clear that he had difficulty stabilising his core and had a weak posterior chain.

We didn’t focus on getting him doing any “CrossFit” for a little while. His priority was simply strength and stability. Really basic stuff.

6 months later he is in a much healthier place. 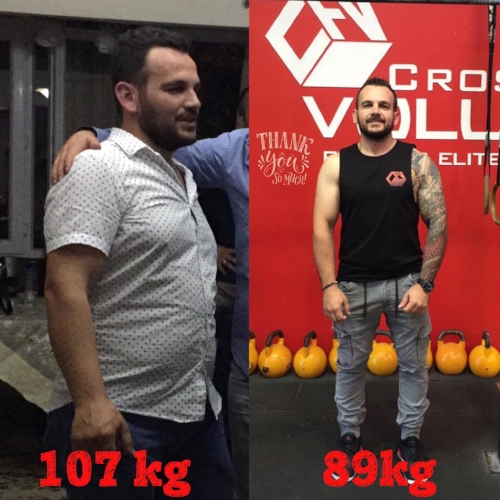 Not only that, he is actively participating in CrossFit workouts now and is pain free.

So what is my point in writing this?

Is it to claim that I am a super coach that can fix all injuries. Absolutely not.

I just believe in coaching.

I believe everyone should have a coach.

This is why even though I have a gym myself, I still invest money into getting the best coaching I can. (My coach is Luke Starr).

I encourage you to do the same.

Have your technique and movement assessed. Leave the programming in someone else’s hands. Watch your progress immediately accelerate.

Get in touch with us and you can start getting results just like Hakan.

Leave your details below.

Subscribe to my weekly email to receive information on the latest training & nutrition advice delivered to your inbox every Monday morning!